It's more than just America's birthday today. It's also the release day for the first three books in the new middle-grade series by New York Times bestselling author E.G. Foley, The 50 States of Fear!

With each book set in one of the fifty U.S. States, this light paranormal series is fun and funny, spooky and sweet, and the perfect reading level for kids 9-12. The books can be read in any order, too, as each book as brand-new characters and concepts!

This series is sold on Amazon, Barnes and Noble, and Audible.

By day—sunshine and Southern hospitality.

But by night, the ghosts of the Old South come alive…

Four nights in a haunted mansion? When 12-year-old Colin Donovan leaves New York with his mom and sister on a road trip to visit his sweet ol’ Southern grandma, he doesn’t expect to encounter--ghosts! Unfortunately, Grandma’s new apartment lies within the walls of Sycamore Hall, a mysterious old plantation house shrouded in local lore. That night, Colin hears chilling spectral voices, comes face-to-face with a phantom—and gets scared nearly out of his wits! But nobody messes with his grandma. So, to protect her, the mild-mannered seventh-grader turns ghost hunter, vowing to find out who or what is haunting the place. Some of the restless spirits he faces still hold antique grudges. And none of them wants their home invaded by a kid in a Yankees t-shirt! 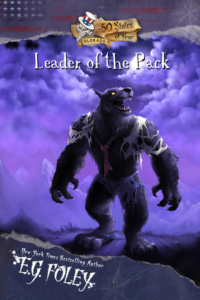 High up in the Rocky Mountains, hit the slopes in sunny Colorado.

But watch out for the full moon!

Eighth-grader Rusty Kendall comes from a family of winners—doctors, lawyers, senators, CEOs—all with big personalities and huge egos. His rich, powerful grandfather owns the Apex Hotel, a five-star Aspen ski resort. Rusty never really wondered why the whole clan gathers there during every full moon. But when the close-knit Kendalls meet once again for their monthly ritual, he discovers the shocking secret to his family’s success—the killer instinct goes much more than skin deep. At each full moon, all the Kendall men turn into werewolves! What’s worse, now it’s Rusty’s time to join the pack and run wild in the Colorado woods. Horrified, he’ll do anything to escape this gruesome fate. Even if it means going up against the big dog—Grandpa Henry, the ruthless leader of the pack.

The lone computer geek in a family of Eagle Scouts and football heroes, Nate Dunning would rather play video games than go camping any day. But after a run-in with the bully of the middle school, Nate’s rugged, outdoorsman dad drags him out into Nature to toughen him up and teach him some survival skills. Just his luck, everything goes horribly awry when his dad forces him to stay out overnight in a tent all alone. Except that he isn’t alone. Turns out the crazy old man at the country store was telling the truth. “Thar’s bigfoots in them woods!” Talk about a hairy situation.

And have a safe and happy 4th of July, y'all!