NO ONE CAN KNOW Wows Kirkus 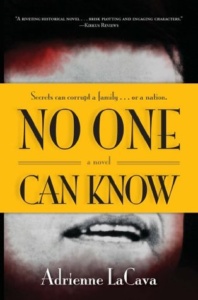 Adrienne LaCava‘s debut novel, No One Can Know, has hit shelves in plenty of time for the anniversary of the JFK assassination, a pivotal point in the story’s unfolding. And with only five-star reviews on Amazon thus far, it’s no surprise Kirkus Reviews loved it, too:

LaCava’s well-researched, character-driven debut thriller tells a tale of CIA involvement in President John F. Kennedy’s assassination. In late 1963, 45-year-old CIA operative Gabriel Haines is sick of the agency’s political wrangling and wants nothing more than to ride his horse and live a “simpler, freer kind of life.” So, when his wealthy Army buddy Tucker Massey suggests that he become the foreman at a cattle ranch in Texas Hill Country, he heads to Dallas for a meeting. A few days later, Haines has a job offer in hand and “a brand new stable, corral, and cowboy quarters” waiting for him. Unfortunately for Haines, however, he walks through Dealey Plaza on his way out of Dallas, on Nov. 22, 1963, and he sees a Cuban exile lurking in the plaza as the assassination occurs. Haines heads to the Caribbean, believing that “his Company credentials” will make people think he was involved in the president’s death. Months later, Tucker reaches out to Haines and begs him to return, and Haines resigns his position in the CIA and heads to the ranch. There Haines interacts with Tucker’s pregnant mistress (who keeps a journal), his status-obsessed wife, his angry teenage daughter, his alienated half-brother and his lonely niece. It turns out that Tucker was part of Lyndon Johnson’s private, off-the-record security squad when Kennedy was shot, and now–President Johnson summons Tucker for an off-the-record mission.

LaCava uses impressive historical research, effectively depicting the simmering burn of the civil rights movement and Vietnam, and demonstrates an astonishing ability to convey the feel of the era without becoming dry or preachy. At the same time, her portrayal of a spunky, motherless preteen girl, a neglected mistress and a world-weary spy are realistic and never stereotypical. Her measured use of imagery also vividly evokes locations across Texas and Mississippi, “where silvery moss dripped from the oak trees like the beards of old men.” A riveting historical novel, featuring brisk plotting and engaging characters.

Working with Adrienne on this story was such a rewarding experience. Not only does it show a true-to-form snapshot of a time in America’s history full of intrigue, deceit, and fear, but it also tells a relatable coming-of-age story of a young girl growing up in this harsh time. Watching Adrienne go through the process of continually honing the story to its best form is one I’m proud to have been a part of. You won’t want to miss it!

Weary of Cold War politics, CIA operative Gabriel Haines can’t wait to leave the Company life for a job on his friend’s isolated Texas ranch. All he needs to do is go to Dallas and seal the deal. But when President John F. Kennedy is assassinated just yards from where Haines stands, the former agent finds himself in tighter crosshairs than ever before. Keeping a low profile on the ranch couldn’t come at a better time.

Motherless preteen Ivy Jean Pritchard is a worrier, but she’s trying hard not to be suspicious when her father sends her to spend the weekend on a ranch with family she’s never met. And with her troublemaker teenaged cousin, high-society aunt, and her uncle’s mistress on the scene, it promises to be more than the western adventure Ivy had anticipated.

Now, marksmen have tracked Haines to the ranch, getting the entire family involved in something very adult and very worrisome. When the weekend turns deadly, Haines and Ivy Jean are the first to learn that secrets, especially those devised and perpetuated “for the good of us all,” can breakdown a family–or a nation–in the blink of an eye.

Congratulations on the release, Adrienne!

1 thought on “NO ONE CAN KNOW Wows Kirkus”