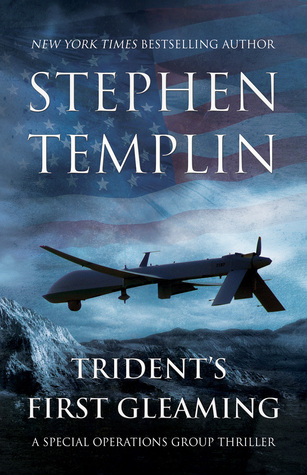 Today New York Times bestselling author Stephen Templin releases a new military thriller, Trident's First Gleaming. Clever, sharp, and packed with quite the powerful punch, Stephen's first solo fiction endeavor truly reflects the intensity of what it's like to be a Navy SEAL.

Former SEAL Chris Paladin leaves SEAL Team Six to become a pastor, but CIA spook Hannah Andrade pulls him back into Special Operations Group, the ultra-secret unit that SEAL Team Six operators and others served under to eliminate bin Laden. Chris and Hannah are joined by Delta Force’s Sonny Cohen to stop a new terrorist threat from launching a deadly cyber-terror against the United States.

Here is what people are saying about this fast-paced thriller:

“There are few authors who have as deep an understanding of the shadowy world of global special operations as Stephen Templin. And there are fewer still who can synthesize that knowledge into a thrilling narrative so deftly. In Trident’s First Gleaming, Stephen weaves a tale that reflects today’s complicated reality, where motives and allegiances are rarely black and white and there are no easy answers. Even more impressively, he manages to do this while still bringing plenty of visceral gunfights and car chases.”

—Chris Martin, Bestselling Author of Beyond Neptune Spear and Shaping the World from the Shadows

Stephen's  SEAL Team Six Outcasts series (including Easy Day for the Dead and Seal Team Six), co-written with Howard E. Wasdin, have consistently hit bestseller lists across the country, receiving praise from some of the highest echelon in the business:

"Pulses with the grit of a Jerry Bruckheimer production..."

"Reveals an intimate look at the rigorous training and perilous missions of the best of the Navy's best."

"Cuts straight to the chase. The literary equivalent of a Hollywood blockbuster...compelling and inspiring."

"It's a wonderful book!"

"Captures your attention at every turn—not knowing if you're about to take a bullet to the head from a SEAL sniper or get hit in the gut with a punch line.

“Great insights into the training and operations of one of America’s premier counterterrorism units. Grabs you on page one and is hard to put down.”

So, if you're a military thriller fan, don't miss Trident's First Gleaming, now available from Amazon.