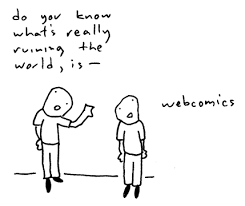 Originally posted on Reading Between the Lines on January 20, 2012 by Danielle Poiesz, written by RossH

I was talking to Danielle a few weeks and sharing some ideas I'd had about Christmas gifts, I sent her a link to a shirt on TopatoCo, which she later posted here, along with some other choice materials from the site. After sharing our favorites of the various witty t-shirts, we got to talking about the webcomic business, and she asked me to put together a guest post for the blog to give a bit of background on this unique slice of the publishing universe.

Many of you may be regular readers of webcomics—they definitely make up an important part of my morning—but this post focuses on the business side of webcomics, rather than simply sharing a list of my favorites (which include Questionable Content, Penny Arcade, Wondermark, A Softer World, and more).

To begin with, the basics: Virtually all webcomics are free to the reader. There was a period of time when there was some interest in the concept of "microtransactions" to support webcomics, meaning that readers would seamlessly pay a tiny amount of money to the writers and authors of a webcomic as they read it (maybe a cent a page), but this concept never really took off for webcomics—or most other content types. The transaction costs of moving this money around outweigh the profits of the plan , and can be a serious barrier to potential readers just out of sheer inconvenience. So, today, you can read the full runs of most all webcomics for free without having to input any personal or payment information before diving in.

But despite the fact that the core product of most webcomics is completely free and open, there are a number of people who have managed to make a reasonably successful living writing and drawing webcomics. Wikipedia has a list of "professional webcomic artists," folks who are supporting themselves through their work producing webcomics. And that doesn't just mean making enough money to keep yourself in ramen. Penny Arcade, one of the earliest and most successful webcomics, has built an empire—a multi-million dollar business that now includes a web-TV show, a biannual video game convention that attracts tens of thousands of fans, and more. Not bad for a comic that is often obscure to those who don't follow the minutia of the video game industry and is frequently far more filthy than the newspaper comic strips many of us grew up with.

So, how does this work? How can these comics manage to build strong businesses while giving away the heart of their work?

Ad revenues are certainly a piece of this, and there are several ad networks tailored to supporting webcomic sites. And some (again, most notably Penny Arcade) can sell access to their special niche audience for well above market rate, and even partner with gaming companies to develop comics specialized for a new game launch. In doing this, Penny Arcade is supported by a strong perception of integrity—they advertise and work with games that they themselves enjoy and want to promote. Many webcomics use ad networks to help bring in sales--Project Wonderful and IndieClick being two of the most common for this purpose.

Of course, in the end, how much profit a webcomic can make through advertisements is dependent on the popularity of the comic itself and rate of traffic to the site. Jeph Jacques, the author of Questionable Content and internet cartoonist, for example, commented on Reddit.com that he makes 50% of his revenues from ad sales. So, where does the other 50% come from?

For Jacques—and for most successful webcomics—merchandise sales make up at least half of the pie. Many webcomics sustain themselves in some large part based on t-shirt sales, often featuring comedic elements drawn from or inspired by their most popular works. Some self-manage this process, and others work with third-party vendors (including the aforementioned TopatoCo, a company run by webcomic artist Jeffrey

Rowland of Overcompensating, Wigu, and other comics that is tailored to the needs of webcomic t-shirt sales).

In support of both of these revenue streams, and in general for building and maintaining a fan base, many webcomic creators are highly engaged on Twitter, both with fans and with other creators. This provides a strong relationship between a creator and their audience that evolves with day-by-day postings of new comics and can contribute
to helping identify potential t-shirts and more.

As with everything, these models are not without their detractors. Plenty of syndicated newspaper cartoonists (which, pre-web, was the only real route to success for a comic creator) complain that webcomic producers aren't selling their comics, they're selling shirts, and in the process devaluing the art form. And, from another direction, a regular strain of discussion among webcomic producers themselves admonishes new producers who seem to focus on the business side of things before they have established a solid comic.

But ultimately, this is a model with an extremely low cost of entry that has empowered a set of creative professionals to follow their interests and build self-sustaining publishing businesses off their work. They have recognized that their core product is difficult to sell, and have thus developed ancillary income streams around it. This kind of business model begs the question: What can be learned here for traditional book publishing, which typically focuses on selling the book itself, or giving away the book in hopes of "building an audience" to later be able to sell books? Can comics show a model for a middle ground, in which an audience can actually be turned into customers in a different way?

About the Blogger: RossH is a researcher and consultant focused on higher education and library policy. And, of course, a fan of webcomics. You can find him on Twitter: @rossh.