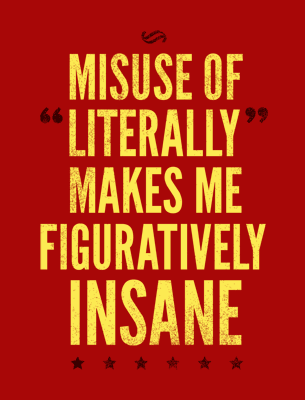 Originally posted on Reading Between the Lines on March 19, 2013 by Danielle Poiesz.

While I am certainly not innocent when it comes to using the word "literally" in its common slang form, I must say I'm not super thrilled at its new spot in the dictionary.

I do my best not to use literally in everyday speech unless doing so correctly, and I think that's what bothers me the most. Adding words to the dictionary gives them validity, tells people it's okay to use this word in the ridiculous way that you do. But really...really...it's not.

For years, readers and writers have debated a common informal use of the word “literally.”

In conversation, some people use the word to provide exaggerated emphasis for a statement: “I love Haruki Murakami so much I literally read South of the Border, West of the Sun one hundred times.” Back in 2011, we even published a grammar PSA about the word.

Reddit reader "andtheniansaid" shared three separate dictionary definitions that include this informal usage, arguing that “it is okay to use the word ‘literally’ for emphasis.”

Merriam-Webster Dictionary added a second “virtually” sense for the word, explaining with this note: “Since some people take sense 2 to be the opposite of sense 1, it has been frequently criticized as a misuse. Instead, the use is pure hyperbole intended to gain emphasis, but it often appears in contexts where no additional emphasis is necessary.”

Cambridge Dictionaries Online added this informal usage to its definition: “used to emphasize what you are saying: He missed that kick literally by miles. I was literally bowled over by the news.”

Oxford Dictionaries begrudgingly admitted the shift: “In recent years an extended use of literally (and also literal) has become very common, where literally (or literal) is used deliberately in non-literal contexts, for added effect, as in they bought the car and literally ran it into the ground. This use can lead to unintentional humorous effects (we were literally killing ourselves laughing) and is not acceptable in formal contexts, though it is widespread.”

UPDATE: Reader Ann Glaviano added this note on Twitter: “‘Literally’ Creeping Since 1914. cf. usage in the opening line of ‘The Dead.’ She passed along an annotated link showing how James Joyce used the word literally in his famous short story.