A Different Kind of Happily Ever After 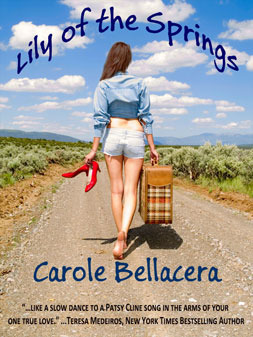 Originally posted on Reading Between the Lines on April 4, 2012 by Danielle Poiesz.

One of the things I struggled with when I worked in editorial at a traditional publisher was the fact that I couldn't always help the writers who I felt had potential. Sometimes the book in question just wasn't there yet, sometimes it wasn't right for the publisher's list, and sometimes it just couldn't get enough in-house support to warrant an acquisition.

Occasionally those books would get picked up by other houses, but more often than not, they'd fade back into the hoard of writers who just can't catch a break. But some writers choose a different path when traditional publishing isn't going their way and they'll publish the book on their own.

When I heard from author Carole Bellacera that she took this path with her novel Lily of the Springs--which I'd read numerous times, given notes on, and saw so much potential in--I was ecstatic for her. She even was so kind as to send me a print copy of the book as a thank you for my support. I'm super excited to see what she ended up doing with the manuscript!

It makes me so happy to see people making their own dreams come true, even if the rest of the universe isn't necessarily being helpful. So, in honor of her bravery--and her courageous and complex main character, Lily Ray Foster--I'll be giving away a Lily of the Springs bookmark this week, and Carole herself has offered to provide one lucky reader with a print or digital copy of the book! Just comment on this post by Friday at 3 pm to get your name tossed in the hat!

The 50’s…Drive-in Movies, Doo-wop Music…and Love in the Back Seat of a ’51 Plymouth In 1952 Kentucky, 18-year-old Lily Foster, the daughter of strict Southern Baptist parents, becomes pregnant by the town “bad boy”—and just like that, she finds herself married to a man who doesn’t want to be a husband. Jake has no intention of letting the inconvenience of marriage stop him from what he believes is his due. In actuality, Lily is the one who is trapped. She loves Jake—always has, since they were children playing in the woods on adjoining properties--and she’s convinced she can eventually make him love her. All it will take is desire and patience. Once the baby arrives, they will be the perfect little family.

From Lily’s home on Opal Springs Ridge to a four-year stint at an army base in New Boston, Texas, and finally, to life on their own in Bowling Green, Kentucky, Lily struggles to maintain a rocky marriage with a moody, immature husband while raising two daughters. Set during the “American Dream” period of the ‘50s and into the turbulent ‘60’s, LILY OF THE SPRINGS is a story of a woman’s indomitable spirit and her fight for independence and identity in an “Ozzie & Harriet” society.

The book has even gotten some great praise from fellow authors, including the historical romance and women's fiction New York Timesbestseller Teresa Medeiros:

"LILY OF THE SPRINGS is like a slow dance to a Patsy Cline song in the arms of your one true love. From the very first page, it draws you back to another time and place and makes you want to stay there forever. Carole Bellacera is a master storyteller."